View cart “Little Woodland Stags Stencil Stags” has been added to your cart. 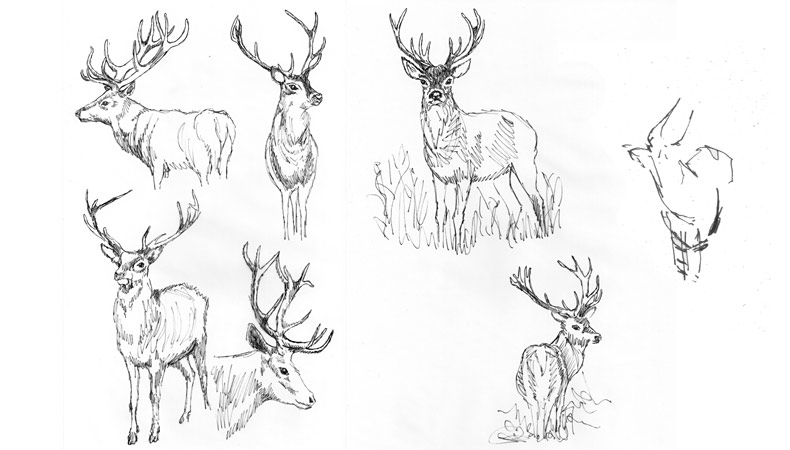 Stags, deer, antelope have long been a recurring theme for me throughout the years, a source of inspiration and interest. I once, lucky enough to be in Kenya at a place called the Ark in the Aberdares, sat up all night to watch for the timid appearance of bongo deer at the waterhole in front of the observation deck. And on their magical appearance, in the wee small hours, sat quietly drawing their grace and beauty, awed by this secret almost apparition-like siting.  Some years later living near Richmond Park and walking the dog there everyday I was ever aware of the presence of the red deer and roe deer as the herds moved around the land – and again they were a great source of inspiration for drawing and design.

Like a lot of artists I’m repeatedly drawn to similar ideas and themes in different guises. Having already designed several reindeer stencils, slightly more whimsical in nature, my thoughts turned to capturing the elegance of the stag, on a larger scale this time – the start of a series of new woodland stencils, perfect for murals and larger decorative pieces.

Sketching these great beasts I’m drawn to their antlers and the great design shapes they make – their grace and crown-like stature. As well as the way they make a sudden and quiet appearance in forest glades from the protective shade of forest trees, looking attentively over their shoulders, always alert. The wild stags amidst forest trees are an inspiring theme for a woodland mural.

From sketches and developed illustration I then chose which stags would carry the best design appeal for the Large Wild Stags and which would work well as little silhouettes for a small woodland stencil. The design results follow.

For this theme I wanted to show two different ways of working. The start of the mural in soft watercolour-like stencilling on a softly colour-washed wall (this stencil effect is achieved by stencilling lightly and then rubbing the paint back with a damp sponge) – and the stag heads on trend setting cushion covers, creating that hunters’ lodge appeal!

They make great cushion covers – each one showing a different stag character! Our Fabric Paints are ideal for this.

The Large Wild Stags are great for woodland stencil work and can be given a seasonal wintry setting in whites and greys and with the new Snow Stencil – designed to add a simple and effective sense of falling snow when stencilled over the finished stags.

Further to that you can bring out a sense of mythology when using white to create ‘white stag’ scenes. Wild stags and white harts are renowned in myth and legend across the globe and through history, culture and religion. The Celts believed the appearance of the white stag meant the Otherworld was to hand. The White Hart’s appearance in Arthurian legend inspired quests and adventure. Considered to be impossible to catch it came to symbolise the unattainable and a deep pursuit of knowledge and mankind’s spiritual quest. In Greek mythology the deer is associated with Artemis the huntress and some Irish and Scottish tales speak of deer as ‘fairy cattle’. In modern storytelling the hunt for the wild stag precipitated the exit from Narnia in the Lion, the Witch and the Wardrobe. And Harry Potter had a glowing white stag as his ‘petronus charm’ – a protective spirit. Fictional or reality this is an elegant animal and a great design motif!

All Motif stencils, stencil designs, photographic and graphic images are protected by copyright and reproduction is strictly prohibited. Henny Donovan stencils are sold for private usage only and may not be used for commercial projects or retail reproduction, or for any kind of resale or reproduction of stencilled images either photographically or for marketing, advertising or publishing of any kind. The stencil and graphic images on this website may not be used or reproduced for any kind of logo, letterhead, website illustration, advertising or other, either personally or commercially.  If you have any queries relating to copyright or usage of Henny Donovan designs please use the enquiries form on the Information and Enquiries page.

This site uses Akismet to reduce spam. Learn how your comment data is processed.