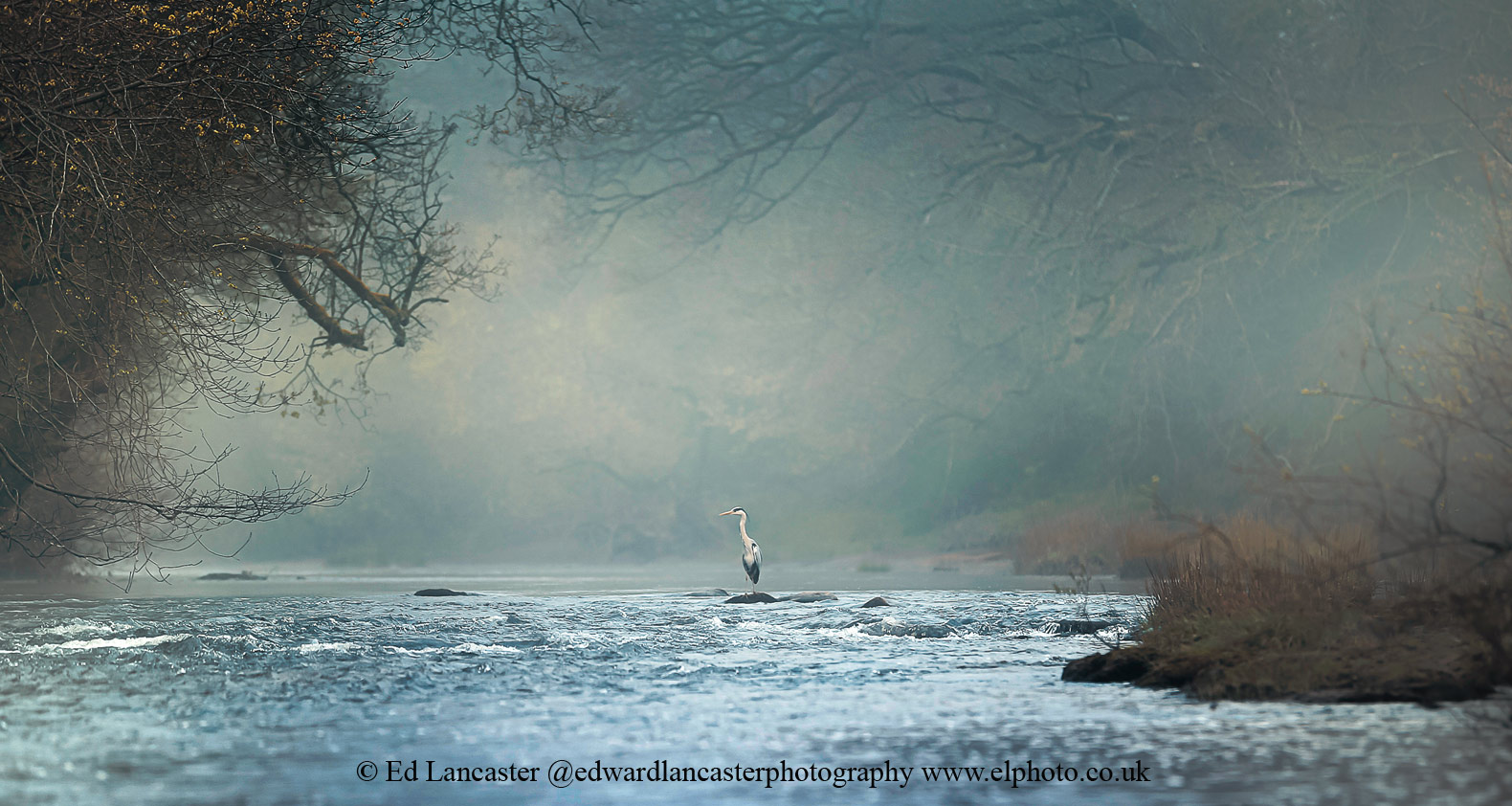 The stories around creating our Waterside Mural Stencils..

Herons are such strange, mystical birds. I’ve long had a fascination for them and their presence. There is something magical about watching them, standing statue-like in the middle of rivers, wading lakeside marshes, or as they fly, their enormous wings beating solidly against the sky.

The lake has been flooded out several times this year, with the water level rising over surrounding fields and woodland. Making it a paradise of space and solitude for the local bird population, especially so during the quiet of lockdown. Early one morning, when the morning haze was still hanging in the air and water bird song was all one could hear, I saw a white heron wading on the flooded fields. I thought at first it must have been a swan, so white, all over. But no, it was too large, standing too tall and as it rose into the sky its wings span and the shape of its neck and head was unmistakeable – and I was not alone, my companion also saw this wonderful sight. We gazed at this bird as it flew slowly away, in that way that herons fly, just watching and listening to the sound of the wings in the quiet.  Research since shows this was probably a great white heron and certainly these flooded wetlands made a perfect habitat.

Swans, ducks and geese swim around the flooded boathouse, bridge and walkways at Llangorse Lake.

And last year, in the summer I was walking in a field that had a stream running through it, along a line of tall, old hornbeams. The trees gave cover to the stream and as I walked along one, then two, then another pair of herons flew up into the sky and across the field to safety.  Again I just stood quietly and watched.  A rare sight, herons are normally solitary birds, and rarely gather in groups.

All of this has been going on since I started the heron design work and it has made me smile and wonder..

Very much is written across different cultures and periods in history about the heron.  This amazing bird has repeatedly captured the imagination of different peoples, in the past and in the present, as it has become firmly embedded in myth and tradition. Sacred serenity is attributed to the heron and it is used to signify stillness, tranquility – likened to the stillness at the water’s edge, where water meets land.

In Ancient Egypt the heron was known as the god Bennu, an ancient deity, linked with the sun, creation and rebirth. Bennu, a large gold and red heron was renownd in one of Egypt’s oldest cities, Heliopolis, being considered highly sacred. Bennu was the creator of light, and the city was recognized as the city of the Sun.

It is thought that the legends of the phoenix, developed in Greek mythology, may have originated from Bennu, where the bird lived for 500 years and then resuscitated itself.  Also, in Greek Mythology the heron was deemed to be a messenger of the gods, so no heron was ever harmed for fear of bad luck. Athena and Aphrodite are known to have sent herons to deliver messages of safe passage.

In Japan the white heron is prized for its ability to move between the elements of air, earth and water and the White Heron Dance (Shirasagi-no Mai) is performed in Tokyo’s oldest Buddhist temple, to beckon good fortune.

In Native American symbology the heron was a sign of patience and good luck and grew to mean the fishermen would have good luck whilst fishing, thus symbolising prosperity; and it is believed those with a blue heron spirit animal in the Native American traditions possess innate wisdom and strength.

In Celtic myth the heron stands for persistence and longevity and the heron is meant to be the reincarnation of Rhiannon the goddess of waters and lakes –  and has links with the lady of the lake.

And on it goes around the world and through history – great meanings are attributed to this bird.

So, bringing a heron into your home for decoration may bring some of these many sought after qualities with it!  And certainly, it is a restful and peaceful image to have around the home.

Shown as early as Ancient Egypt, this fascinating and beautiful flower appeared in hieroglyphics and architecture. Known to have grown profusely in the river Nile, the lotus represented death and rebirth to the afterlife and was associated with the rising sun and Ra, the sun god.

The lotus flower’s association with rebirth and enlightenment comes from its unique growing cycle, where every night it submerges into the swamp or river water it lives in and each day rises again, re-blooms with pure, clean petals. This daily life, death and rebirth cycle has led to it being called “lotus flower of life” and the well-known phrase “lily of the swamp”, as it cleanses the swamp it lives in. It can also survive extreme conditions and it is known to have survived the last ice age.

In eastern cultures, Buddhism and Hinduism particularly, the lotus is considered a sacred flower, representing transformation and rebirth, spiritual awakening and enlightenment.  Meaning is also attached to the different flower colours. Red Lotus symbolises compassion, open heartedness and generosity of spirit. Pink is sacred, representing enlightenment. Yellow is the symbol for achievement of enlightenment and the pursuit of spiritual growth. Blue greater wisdom. And white lotus flowers, of course, represent purity and grace.

What is a koi? Simply, Koi is the Japanese word for the carp! The brightly coloured fresh water fish of beautiful ponds and waterways.  This wonderful little creature also bears rich symbolic meaning and is associated with perseverance, strength of character and purpose, accomplishment and courage. The koi’s links to good fortune and success, make them highly popular, especially in Japan.

They have their own legend too – a story of swimming up stream and trying to swim up a waterfall, over and over until one succeeded and the gods recognized the little fish’s perseverance and turned it into a golden dragon!

Koi are also closely tied in to the yin and yang symbol, the perfect balance of positive and negative, day and night and have become linked with feng-shui and balance in design. All of this along with their visual appeal have made them popular interior design motifs – we’ve sold many, many fish stencils over the years!!

It is an interesting thing about design… some design threads stay with you for years and years gradually building over time to complete the creative process.  It has been this way with both the lotus waterlily motifs and herons and now they have come together to become part of our Waterside Mural Stencil Range.  Back in 2006 I wrote Creative Wall Art, which was published here and in the US and in several languages globally (included above and below – design sketches from the book).  In putting this range together now, I had forgotten the original design inspo, which was actually a waterside mural piece in the Creative Wall Art  book! There was a whole chapter and a step by step process on creating a watercolour mural on a gesso ground.  I started some of the designs you now see in this range back then. They have since been developed a little bit at a time over the last 10 years or so and finally now after another 2 years or more in production (our busy lockdown periods precluded any real product development!) – they are here, finished and ready to use!  A long time in the making!

I was literally stunned when I first saw the tall swaying lotus lilies of eastern lands! The flowers standing tall above the water and seen from so far away, with their wide shapely, dish-like leaves, creating a bed of wonder across the waters!  I made many early sketches (above) and early paintings and I absolutely knew this was going to be a stencil design one day – and now the tall lotus are finally launching in our Waterside Mural Stencil Range!  There are four of them – I had so many drawings and designs it was hard to compress down to less! (BTW that little kingfisher you can see in the drawing is already in our bird range – see Kingfisher Stencil).

We’ve stencilled a stair mural here in the studio and chosen a soft watercolour style to create that peaceful and watery feeling!

The designs in this range are all rich in symbolic meaning and all perfect for creating a calm sanctuary away from the uncertainty of the world at the moment!  A brand new original stencil range perfect for creating those stunning murals you’ve always longed to have a go at!!

I’m quite sure this many fish wouldn’t be swimming blithely around two herons feet, quite so obliviously – but it looks amazing, especially on this stunning turquoise backdrop! Heron Stencils 1 & 2 shown with Medium Japanese Koi and Little Japanese Koi.

In amongst the lotus flowers..

Our Lotus Waterlily Stencils – depict beautiful lotus flowers with shapely leaves and integral water swirls. Inspired by the tall lotus waterlilies of the Far East with their wide wavering leaf pads. Use as stand alone designs or with our Heron Stencil and Japanese Koi Stencils. Perfect for walls and fabrics.

I once saw a mass of Japanese Koi in the water gardens at the Brooklyn Botanical Gardens, New York – this was over 10 years ago and I knew then, that they would one day be a part of the motif range. Beautiful two layer fish stencils that perfectly capture the bright colours and amazing markings. Our Japanese Koi Stencils are totally original beautiful koi carp fish motifs in two layers with water swirl motifs. Perfect to use in their own right or with our Heron Stencils and Lotus Waterlily Stencils.

See the Waterside Murals Range at a glance!

All rights reserved. Henny Donovan, and her brand name Henny Donovan Motif, has asserted her right as the sole & legal copyright owner of all stencil designs, photographs and text published in this website/blog and as such are protected by copyright, under the copyright, designs and patents act 1988. Copying of any kind of stencil designs is strictly prohibited. No design, stencil, photograph, image, title, text or part therein, may be copied, reproduced, stored in a retrieval system or transmitted in any way or by any means, electronic, digitally, mechanical, photocopying, recording or otherwise, or re-used, or sold by any person without the prior written agreement or permission of the copyright owner.

This site uses Akismet to reduce spam. Learn how your comment data is processed.