View cart “Large Letters Theme Pack Stencil A – Z” has been added to your cart.

The Large Capital Letters Theme Pack Stencil is a simple stencil design of large capital letters  – very much in demand for the trend for lettering and calligraphy decoration. The Large Capital Letters Theme Pack Stencil comprises the whole aphabet, letters A – Z, in a simple clear script designed to adapt to both classic and contemporary schemes. The letters are each 14cm (5 1/2″) tall and laid out groups of four on 7 sheets – see specifications below.

The Large Capital Letters Theme Pack Stencil can be used in a many colour combinations. Stencil letters in either a single colour on bright, light, dark or neutral backgrounds. Or use white on dark and classic colours for impressive and traditional styles, or bright fun colours or pastel shades for children’s’ rooms and nurseries.

Above top – the letters of the Large Capital Letters Theme Pack Stencil arranged in a vertical column, shown ‘shadow’ stencilled with Ice White and then over-stencilled in a random sequence of both our bright and pastel Stencil Paint colours.

Also see right for some of the stencil paint colour possibilities you can choose from and links to our Stencil Paints, so you can reproduce these colour options should you choose.  Other colour choices, not illustrated here, could be navy on white, black on white and classic white on all colours both dark and muted as well as on primary colours – red, yellow or blue.

Above – Left Large Capitals ‘shadow’ stencilled – in Ice White and over-stencilled in Storm Stencil Paints on a navy-grey background. Right – in Coffee Bean and Shoreline over-stencilling.

Stencil with a stencil roller or stencil sponges, or try using spray paints!

Left – the 7 sheets that make up this theme pack. 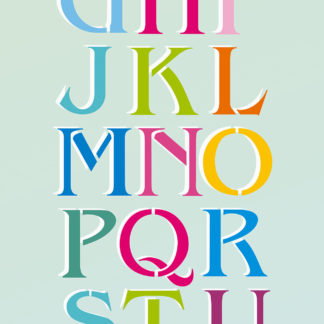